You may find yourself hiking, biking, or paddling to places for a solo adventure on the Nature Coast, or elsewhere in Florida, so be aware – you may not be alone.

You’ve seen videos of huge alligators roaming golf courses, stopping hikers on trails, and even snarling up traffic in cities as they cross busy roads. This is Florida and to see an alligator where you least suspect, is far from unusual.

Floridians share their state and waterways with these dark scaly prehistoric beasts whose lineage dates back 225 million years, so in essence, it is the alligators who share the state with humans. Before you decide to bolt the doors and take to hiding, there are some facts you should know about these unusual reptiles that will help you embrace this co-existence.

Got Water? There May Be a Gator

Always look before you leap in the sunshine state, because if there is water, there may be an alligator. Gators have been discovered in cow field ponds, roadside puddles and have even ventured into private swimming pools!

You can find American Alligators throughout the Southeastern United States, from East Texas and the steamy Louisiana Bayous to the tidal marshes of North Carolina, South Carolina’s Low Country and throughout the entire state of Florida. They prefer fresh water as their habitat, but can be found in brackish water and even head out to saltwater for brief periods to feed.

Alligators are apex predators. They are top of the food chain beside bears and the invasive Burmese Python. But unlike the Hollywood movies, most alligators will not go out of their way to hunt humans. In fact, they have a natural aversion to people and prefer not to be around them.

An alligator that is not afraid of humans is a gator to fear! It is illegal to feed wild alligators in Florida. That piece of bread you innocently considered tossing into an alligator’s open mouth may end up with the loss of a life, be it human, gator, or both.

An alligator that has been fed loses its natural fear of humans, and instead of relying on their own expert hunting skills, they will look towards people to provide them with meals and snacks. These alligators grow. A 3-foot alligator seeking to be fed becomes that 8-footer who has become fearless.

In 2019, over 14,000 nuisance alligators were reported to the FWC SNAP (Statewide Nuisance Alligator Program) hotline. Alligators are territorial and upon relocating, will do their best to return to their original home.

Nuisance alligators are caught by state-licensed trappers and euthanized. Sometimes their meat is harvested and also their hide. Don’t become part of the problem- don’t feed alligators.

Alligators are nocturnal hunters. That crystal-clear swimming hole you see by day may be a prime hunting ground for gators come twilight. Respect these hunters and avoid swimming between dusk and dawn.

As hunters, gators are on the lookout for prey. Food for alligators is anything that is smaller than them, like fish, small mammals, birds, turtles, your family dog or cat, and even small children.  When going for walks near and around water, always keep your dog on a leash and watch your child. Never let them near the water on their own.

Alligators can stay underwater for up to two hours. They have two sets of eyelids- one like humans, swipes up and down, but the other is a thin nictitating membrane that swipes left to right. It works like a swim mask to protect the alligator’s eyes and enable them to see clearly under the water.

Alligators are Most Aggressive During Mating Season and Nesting Season

American alligators are most active and aggressive during mating season, which lasts from April to June. Male gators are on the prowl for a female and can have a home range of over 1,000 acres during the mating season. They are aware and intent on driving competition away during their quest for a mate.

After mating season ends, females lay their eggs. The nests usually resemble a mound of sticks, mud, and leaves. Only one-third of the hatchlings from the 32-38 eggs they lay will survive to their first year. The females stick around their nests to guard them from predators. Anything that approaches their nest is a predator- including humans. They will stay to see their babies hatch, mid-August to September, and continue to raise them for the next two years.

Female gators tend to be smaller than their male counterparts, growing to an average of 9 feet (males can grow to 13-14 feet), but they are notoriously protective of their eggs and babies. If you see baby alligators on your outdoor adventures, you should never approach them, as a ferocious mama will be only a few paces away!

You’ll often find alligators sun bathing on embankments or resting in the weeds and reeds in waterways and lakes. Steer clear of these areas on the water.

Never paddle or swim towards an alligator. They may take your actions as an act of aggression. Give them wide berth.  Want a photo? Use a telephoto lens. Alligators are agile in the water, swimming up to 20 mph. Respect the gator zone by giving alligators their space.

If an alligator hisses at you, move away quickly. Much like a dog growling at an intruder, it’s a warning.  You have encroached on their territory. There may be a nest nearby or babies. Either way, move to safety.

What Do You Do if You Are Attacked by an Alligator?

If you are paddling, and an alligator starts to pursue you, paddle in the opposite direction. If you are on land, yes, run (and don’t zig-zag- that’s just a myth). Climb a tree if you must. Just get away. Put as much distance between you and the alligator. Once safely away, report the incident to the FWC nuisance alligator hotline at 1.866.392.4286.

If you are attacked by an alligator. Fight back.  Be loud and violent. You are literally fighting for your life! Hit the snout and eyes. Alligators have been known to release their prey because it wasn’t worth the fight. If you are bitten by an alligator, go to the hospital for any wounds and report the alligator to the FWC hotline.

Did You Know? Some Cool Gator Facts

A little knowledge goes a long way, so while you are paddling or hiking on the Nature Coast or elsewhere throughout Florida, always remember to be alligator aware. Be sure to advise any of your out of state visitors about Florida’s unique reptiles, the American Alligator.

Sally White is an award-winning outdoor travel writer, photographer, and former gator-phobe. She publishes two blogs, which we recommend checking out… Adventures of Mom, and Florida for Families.

Well said! We have too many tourists who want to get a dramatic close-up of gators, and as you say, they should use a telephoto lens. 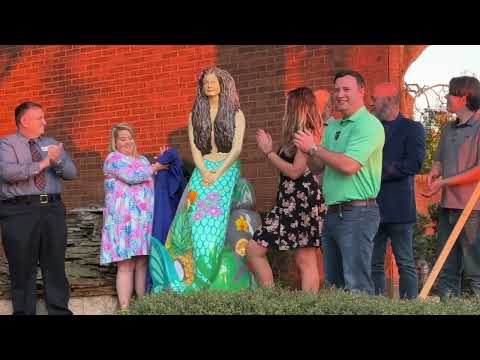 Video of the Week:
Unveiling of Sirena de la Fruta for the Mermaid Tale Trail