Lindsay Cross, Executive Director for the Florida Wildlife Corridor, met with Diane Bedard, Publisher of NatureCoaster.com, at Oysters restaurant in Crystal River in August of 2017. The organization was beginning a project to highlight critical linkages needed to help complete the Corridor, and Florida’s Nature Coast was the first one selected.

With the upcoming expansion of the Suncoast Parkway into Citrus County, the organization sought to showcase an innovative way to conserve lands within the Corridor by directing the required mitigation for new development and transportation infrastructure towards protecting priority wildlife habitats.

A small population of Florida black bear lives in and around the Chassahowitzka Wildlife Management Area (WMA), near Weeki Wachee and Aripeka. There is concern about this subpopulation of bears, as it is isolated from the other populations around the State. As the Florida Turnpike Enterprise (a division of the Florida Department of Transportation) went through its permitting process, staff worked with conservation partners to plan for safe wildlife passages and mitigate for loss of habitat that will result from the parkway construction. In particular, the Turnpike Enterprise will purchase lands adjacent to the WMA, thereby protecting the bears’ existing habitat range and protecting additional acreage within the Corridor.

“We wanted the film to highlight how we can better support our treasured wildlife and protect their habitats by working together,” Lindsay shares. “The Suncoast Parkway expansion provided a new way for wildlife directly impacted by human encroachment to receive the benefit of that mitigation.”

As a consultant to the project, Diane was able to learn about the various agencies and how they work to manage wildlife and wild lands. Touring the WMA and meeting Steve Brinkley, its manager, provided the opportunity to see what typical bear habitat looks like, including sandhills and swamplands within the WMA. Along with the bear education, we learned about the cypress logging industry during the early 1900s and the ghost-town of Centralia. The logging company that was there took out nearly all the giant cypress trees in that area, except one. We hugged it.

The Project began with a kayaking adventure through Kings Bay, facilitated by Birds Underwater and their excellent guides. To better understand the Nature Coast, the organization spent several months meeting with local business and community leaders and hosting events. Supporters and friends of the organization met at Birds and paddled the area for a couple of hours. Afterwards, they gathered at Crackers Restaurant for some hors d’oeuvres, live music and social time.

Several film makers responded to the organization’s request to create the Nature Coast short video. Modest Giant was selected after a lot of research, debate and discussion. A band of creatives forging ahead in the world of motion is how Modest Giant describes themselves. They won the bid for their ability to tell short stories with film and to embrace the whole picture of what it takes to achieve the statewide mission of connecting the Corridor.

About the Florida Wildlife Corridor

The Florida Wildlife Corridor is best known for their two expeditions that showed how wildlife might traverse the State, bringing the beauty of the twenty-seventh state’s interior wilderness to many who previously only thought of it as beaches and boats. In 2012’s first expedition, bear biologist Joe Guthrie, conservationist Mallory Lykes Dimmitt, photojournalist Carlton Ward Jr., and filmmaker Elam Stoltzfus trekked 1,000 miles over 100 days from the base of the Everglades National Park to the Okefenokee National Wildlife Refuge in southern Georgia.

The second expedition, entitled Glades to Gulf, followed in 2015. It included the Nature Coast as part of its 1,000-mile leg of the Corridor from the Everglades Headwaters in Central Florida to the Gulf Islands National Seashore in Alabama.

Both Expeditions documented wildlife habitats, watersheds, participating working farms and ranches, stories of ecological importance and the statewide vision that comprises the Florida Wildlife Corridor. The Expeditions were shared with the public through images, documentaries, radio, social media and weekly “Trail Mixers.”

“The Florida Wildlife Corridor seeks to engage citizens, lawmakers, businesses and organizations in the shared mission of conserving what is special about our state. It is a way to unite individuals and groups in preserving and restoring valuable wild places as habitat for wildlife and as opportunities for future generations to enjoy pure water and air, and interact with the nature we hold dear,” explains Lindsay Cross.

“We work towards this goal through multi-media storytelling. This new video shows how we can work collaboratively to better manage economic growth and development by first protecting critical areas for wildlife and water supply. Economic progress can coexist with natural Florida if we’re thoughtful and intentional about it.”

Florida Wildlife Corridor has ten Critical Linkages to help connect the lands and waters of the State for wildlife.

There are ten priority regions that need urgent protection to maintain connectivity within the Corridor. Protecting these areas, called the “Critical Linkages,” will help achieve the vision of this 501 c(3) nonprofit.

Florida’s Nature Coast was chosen as the first area to be highlighted because of the timely story involving the Florida black bear and the parkway expansion. The Chassahowitzka bear  population is important to the Florida Fish and Wildlife Conservation Commission and they were kind enough to send Mike Orlando, Assistant Bear Management Coordinator, to explain how Florida black bears are recovering from their near-extinction and ways humans can handle bear interactions to keep both species safe.

Many Contributors make a Better Project

The Chassahowitzka bear population is important to the Florida Fish and Wildlife Commission and they were kind enough to send Mike Orlando, Assistant Bear Program Coordinator, to help us in explaining how Florida black bears are recovering from their near-extinction and ways humans can handle bear interactions to keep both species safe.

The Storch property is adjacent to the one that was purchased through mitigation for the Suncoast Parkway project. With a big heart for native Florida and a lot of hard work, TJ and Betty have created a sanctuary of sorts. The wildlife that roams their land is considered part of their extended family. We visited another ancient Cypress and hugged it.

Martin Horowitz, Environmental Administrator for the Florida Department of Transportation, showed the team how bridges are planned and constructed to allow wildlife safe passage from one side of the roadway to the other without crossing. He explained the many species that would likely be impacted by the Suncoast expansion, how construction plans try to account for these flora and fauna, and showed us the area that would be utilized adjacent to the power transmission corridor. 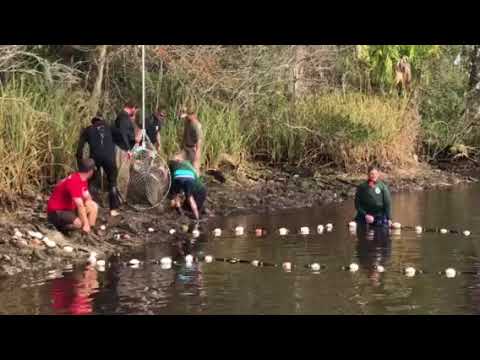 While manatees were not part of this film’s storyline, they are an important symbol of how man and mammal can coexist, and Captain Charlie Slider of Manatee Tour and Dive took the film crew out on a tour of Kings Bay. While moving toward Three Sisters Springs, we encountered a manatee rescue of a mother and calf who were undernourished. It was eye-opening to witness the physical demands and skilled coordination of the team of twenty-some people working together to get the manatees out of the water and to a safe place for medical care.

What was Different & How does it Help

To construct the parkway expansion, undeveloped areas, as well as portions of the Withlacoochee State Forest, will be impacted. Those losses need to be mitigated. Typically, an agency will purchase “credits” in a mitigation bank that may be located far from the impact area – not necessarily providing direct offsets to the animals and plants affected by the new development or road.

In this case, a conservation partner knew of a piece of property bordering the north edge of the Chassahowitzka WMA that was for sale. Florida’s Turnpike Enterprise chose to purchase that land. The property will be added to state-managed lands, essentially growing the footprint of protected areas and seaming these pieces of the Corridor together.

The Valerie Theater in downtown Inverness has been selected to preview the new short video on Friday, March 23. Before the Nature Coast film is viewed, attendees will be treated to “The Forgotten Coast” documentary about the Glades to Gulf Expedition. A Q & A with members of the Florida Wildlife Corridor will follow.

Public tickets were sold out immediately.

Representatives from the many organizations, individuals, and agencies that worked together in its creation will gather for a celebratory meet-and-greet at the theater before the film. The Citrus County Chamber of Commerce was instrumental in organizing and supporting this event.

How You Can Support the Mission

As Nature Coasters, we have an innate love of the less flashy part of Florida and its inhabitants.

Using a science-based approach, on-the-ground knowledge of the Corridor, and the support of thousands of followers throughout the state and nation, the Florida Wildlife Corridor now embarks on its most important journey – to accelerate the rate of conservation in Florida by 10% annually in order to protect 300,000 acres within the Corridor by the end of 2020.

Maybe you want to make a financial contribution or follow their social media or website. Let’s work together to protect the nature that makes our home so magical.