Why Jay B. Starkey Jr. is being Honored with Pasco EDC's 2018 Leadership Award : NatureCoaster.com

Why Jay B. Starkey Jr. is being Honored with Pasco EDC’s 2018 Leadership Award

Starkey’s leadership through education, land preservation and music will last for generations in Florida’s Nature Coast

The Pasco EDC Leadership Award celebrates a person in Economic Development, who has had a remarkable impact on Pasco County and our community. Starkey’s leadership through education, land preservation and music will last for generations in Pasco County and the State of Florida. Starkey will be honored September 6, at the Pasco EDC 32nd Annual Awards and Trade Show at Saddlebrook Resort.

“You hear the name Starkey in Pasco County and it’s a well-known, recognizable name, but many people don’t truly know the person and story behind that name” said Bill Cronin, President/CEO Pasco EDC. “Jay B. deserves this honor for everything he has done for the betterment of Pasco and his role as a true leader. He has made a lasting impact on Pasco through his many philanthropic efforts.”

Friends and family describe Starkey as a true gentleman who always wanted to give back. Jay B. Starkey, Jr. served on the Pasco County School Board for the majority of the 1970’s and always encouraged his four children to give back to the community as well. He served on the Pasco County Tourism Board for years. Starkey and his wife Marsha have donated over $1 million to the Florida Orchestra and pledged another $1 million to Morton Plant North Bay Hospital in downtown New Port Richey.

Recognition has never been the motivator for this humble man; he simply wanted to preserve land for families to cherish throughout the years and play music for all to enjoy. The Pasco Economic Development Council is proud to honor Jay. B Starkey Jr. for his profound leadership and lasting impact on Pasco County and Florida’s Nature Coast.

In 1922, Jay B. Starkey, Jr’s father resigned his position with the U.S. Postal Service in St. Petersburg to take up cattle ranching. He quickly purchased his first tract of land, 10 acres south of Largo. It became known as the Ulmerton Ranch, and he worked through the Depression, selling hogs for 3 cents a pound and cattle for 4 cents a pound to keep his family fed.

Jay B. Starkey Jr. was born in 1935 in St. Petersburg. He lived in a one-room frame house on the Ulmerton Ranch and contributed to farming operations between school times. As soon as he could walk, his father put him on a horse, and he simply loved the ranching life. He attended college to study agriculture at University of Florida. While he was away at college, his dad sold the Ulmerton Ranch and purchased land in Pasco County along with three partners.

Fifty years later, Jay B. Starkey Sr. became the sole owner of the Anclote River Ranch, 16,000 acres of Florida wilderness bounded by the Anclote and Pithlachascotee rivers. He donated 250 acres to the Southwest Florida Water Management District and sold 1,759 acres to the District for a fraction of its value to help create a wilderness park. (Starkey Wilderness Park)

Jay B. Starkey Jr. helped clear the land and make improvements for cattle operations. He purchased the herd from his father in 1965. Watch Jay B. Jr. tell about life then on the video below. 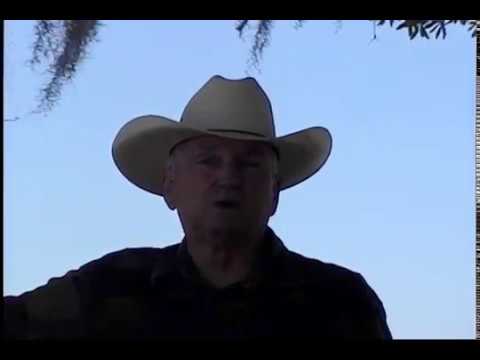 A simple ranch house was located on State Road 54, where J.B. Starkey Jr. and his wife Marsha raised their four children, Frank, Laura, Sarah and Trey. Cattle operations, a citrus grove, logging operations, and a tree farm were part of the agricultural activities that Mr. Starkey pursued while raising his family. He designed, made and sold a bail dumper and herbicide applicator also.

In 1989, Jay B. Sr. passed away. Over the years, more land from the north portion of the ranch was sold or donated to the County and SWFWMD – to pay estate taxes some of the land was sold to the Suncoast Parkway for mitigation credits and this land was added to the J.B. Starkey Wilderness Park. The expansive 8,300 acre wilderness park is a lasting tribute to the Starkey family’s commitment to conservation of open land for public consumption.

Today it consists of a kiosk, open space, camping area, horse corral and equestrian trail, nature and multi-purpose trails, day use area, shelters and pavilions, playgrounds, horseshoe and volleyball courts. The birding trail was designated by the Audubon Society and 177 species of birds have been viewed.

Sharing a Deep Love of the Land

“I want a man to be able to bring his children and see it how I saw it, how God almighty made it,” Starkey said to Eric Smithers of Tampa magazine about the J.B. Starkey Wilderness Park in 2014. “Without that, there won’t be any places to see natural Florida.”

In the 1950s, the Osceola Turkey was in deep trouble. Overhunting and habitat destruction had pushed the number of Florida Turkeys to less than 25,000 by the 1960s. Florida Fish and Wildlife was trying to breed the turkey population back to health on farms and introduce them to the wild with limited success. Jay B Jr. was a leader in saving the population by relocating the wild birds to the Starkey Ranch where they had plenty of room to breed naturally and the proper ecosystems to thrive. Today there are over 100,000 wild Osceola turkeys throughout the Sunshine State.

As part of Jay B. Starkey’s desire to share his love of the land, the Flatwoods Adventure Eco-tour was developed on the ranch, providing wonderful educational experiences for visitors and schoolchildren to learn about ranching, the five ecosystems on the ranch lands, local wildlife, and early Florida pioneer life.

Full Moon Festivals were held in winter months with a community barbecue meal, games for kids, sing-a-long style cowboy music, marshmallow roasts, moonlight horseback rides and hayrides, and great storytelling. Horseback rides were also available through the ranch, but all these activities ceased by 2010.

Jay B. Starkey Jr. is a gifted musician, playing the saxophone and singing in a gospel quartet and several choirs, including the Master Chorale which sings with the Tampa Orchestra.

Frank Starkey is a gifted architect with an active practice called People Places in New Port Richey’s downtown. Trey and Frank developed LongLeaf, a development unique to the area, with elevated front porches and rear garages on homes that are designed to encourage communication between neighbors.

Today, Trey Starkey has moved into farming with Aaron Derkson, with a thriving blueberry farm, called Starkey Blueberry Farms offering commercial and annual u-pick opportunities in Trinity, across from Longleaf. They are currently developing Starkey Market, a fresh produce market, moving into grass fed beef and free-range chicken followed by a juice and sandwich bar, which will be opening this fall. Trey’s wife Kathryn is the Pasco County Commissioner for District 3.

Laura Starkey has opened the first natural burial cemetery in Florida’s Nature Coast, called Heartwood Preserve. It is located in Trinity on Starkey Boulevard. Conservation Burial uses only biodegradable materials and a portion of the burial fee is used to help permanently protect the natural environment. Additionally, a Nature Preserve is on the property, with free environmental education opportunities offered monthly.

The Times are Changing but the Values Remain

The Anclote River Ranch was parceled out over the years until about 2,500 acres was left. It was Jay B. Jr. and his family’s wish that the development didn’t follow the sprawl patterns of tract housing and strip shopping centers that had become of his father’s Ulmerton Ranch.

Today, Wheelock Communities is developing a community called “Starkey Ranch” that features 800 acres of parks and open space and more than 20 miles of trails that connect the community with the adjacent Jay B Starkey Wilderness Park.

This story used information from SWFWMD, Pasco EDC, The Starkey Ranch, Pinellas County Heritage Voices, and Tampa Magazine, as well as my fond memories of visiting the Starkey Ranch during the Flatwoods Adventure times.