Cheyenne Bragg is a real mermaid. It’s not only her job, but it is also the fulfillment of her childhood dream.

“When I was a little girl, 7 or 8 years old, my parents took me to Weeki Wachee and I loved the mermaids. I thought they were so awesome and I wanted so badly to be one,” Cheyenne confided in me.

This article was originally written and published in 2016 on NatureCoaster.com, but it was so popular that we thought we would feature it again.The park is currently under renovations and closed until a June 15, 2019 expected opening…

I met her at this historic Florida State Park and she took the time to explain how and why she became a Weeki Wachee mermaid, “I remember being mesmerized by the mermaid shows. I didn’t notice the air hoses and wondered, ‘how are they breathing?’”

Cheyenne was born in Wesley Chapel. She is the youngest of 7 children and her family moved to Brooksville as Wesley Chapel became more urban.

Fast-forward a dozen or so years, and Cheyenne becomes a lifeguard at the park. She is a strong swimmer and every day she can see the mermaids from her station performing their beautiful underwater show. She fell in love with the mermaids all over again.

“When you work at Weeki Wachee, it feels like a big family. I had experience as a dancer and cheerleader in school and thought, ‘I should try out to be a mermaid,’” she shares.

She worked hard, tried out… and wasn’t selected.

“It was heartbreaking. I just wanted to give up, so I went back to my lifeguard job. I could still see the daily shows in the ‘fishbowl’ and my desire to be a mermaid was still strong. My family kept encouraging me to try again, so when the tryouts came up a second time, I went back and gave it my best,” said Cheyenne, “and this time I made it!”

Weeki Wachee mermaids are a very special group. The Weeki Wachee Springs State Park employs twenty-five to thirty mermaids on average. With 350-400 inquiries coming into the park annually, tryouts are held only when there is a need.

Park PR and Marketing Director, John Athanason explained that there is very little turnover in the mermaid staff, “Usually someone leaves because they are going away to college or they get married – major life changes. I think the mermaids stay with the position because they work so hard to get it and there is real camaraderie amongst the team.”

The tryouts are held once or twice a year. “We announce upcoming auditions through our social media channels, and the only requirement to be a mermaid is that they be eighteen years or older,” John explains.

About three-fourths of the applicants are eliminated through the water testing and then the personal interviews. The water test consists of swimming 400 yards, with and against the current, treading water for fifteen minutes, trying to perform three underwater ballet moves after seeing them once, and being able to hold your breath underwater for thirty seconds.

Cheyenne shares that the water test is very difficult. In fact, looking confident underwater is probably the biggest challenge in becoming a Weeki Wachee mermaid. The water is cold and you have to be able to control your body’s natural tendency to want to go to the top of the water.

The mind is saying, “This isn’t right, breathing air from a hose underwater won’t work. We have to get out,” and a mermaid needs to learn to control those impulses and look confident while staying underwater.

Watch the video below to experience a Weeki Wachee mermaid’s descent to the underwater fishbowl where performances are held daily. 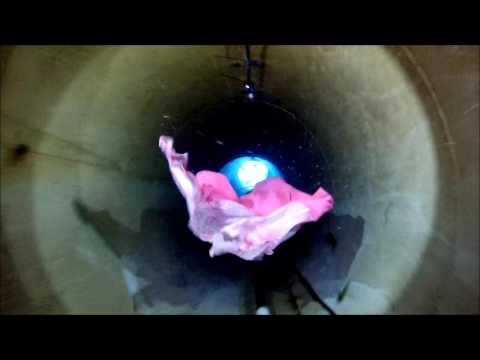 Add the choreographed moves, storylines, and descending through “the tube” to the underwater theater and you have some scary stuff going on. “We emphasize safety,” John explains, “There is always a safety person in the water behind the scenes in case one of the performers needs help. Say an air hose needs moving or something else is amiss. The safety person can take care of these things freeing the performers to enjoy putting on the show.”

Each member of the Weeki Wachee mermaid team must learn every position.

Cheyenne started as a hostess in the underwater theater, seating guests. She was trained in SCUBA and certified. Meanwhile, between shows, she practices the ballet-like moves in front of a mirror. As she advances in her training, she practices moves on the surface of the water, then gets her SCUBA certification, and finally graduates to the air hoses.

“It is very difficult to get adjusted to swimming underwater for long periods and teaching one’s body to trust the air hose as an acceptable method of breathing. I was somewhat disoriented and my eyes had to adjust to seeing clearly underwater initially. It took me about 8 months before I was ready to do a show,” Cheyenne shares.

Most mermaids require eight to twelve months of training before they are able to perform in the underwater theater. They must learn each position: Control Booth/Director, Swimmer (multiple roles), Host/Hostess, and Safety Person (in the water), rotating as needed. The position is approximately 30 hours a week. Summer weeks can add an extra shift.

Although mermaids are currently very popular in our culture, being a Weeki Wachee mermaid represents the brand of the park.

Weeki Wachee mermaids do not just put on a tail and go swimming. The nearly seventy years of history, the desire to carry on a legacy of giving beauty, grace, and elegance to audiences and fulfilling youthful dreams are all part of what makes Cheyenne proud to have made her childhood dream come true.

Her advice for wannabees? “Practice being comfortable in water for long periods of time and carry yourself professionally. We have a responsibility to be on our ‘A’ game at all times. Although the show may get monotonous, you never know who is in the audience; whose dream you may spark. It is an awesome honor that we hold dear.  Oh, and if you don’t succeed the first time, definitely try again!”

Cheyenne is a beautiful professional educated young lady who makes a beautiful and graceful Mermaid in and out of the water...... Come see a show and remember the magic of yesteryear