The Bellamy Brothers Let their Love Flow out of the Honky Tonk Ranch : NatureCoaster.com

Biography Release & Reality Show Premier – Will they Tell All?

Have you ever wondered how David and Howard Bellamy, collectively known as The Bellamy Brothers, went from rural poverty in Darby, on Florida’s Nature Coast, to touring the world 150-plus days a year?

“Our parents were the hardest working people we knew,” David relates in their new book, Let Your Love Flow, available for preorder by clicking here and releasing in bookstores April 17, 2018.

The popular musical duo has traveled the world since their first hit single, “Let your Love Flow”, went to number 1 on the Billboard Hot 100s chart (May 1, 1976). It crossed over to country and adult contemporary Billboard charts, then took off in Europe.

“We were pushed into the international music world with our first hit,” Howard Bellamy says.

The First Book Written about The Bellamy Brothers

Let Your Love Flow is the first book ever written about David Milton Bellamy and Homer Howard Bellamy, an American pop and country duo who learned to play music from their father, Homer.

Homer was a hard-working cattleman and hard-playing musician who loved family.

Francis was a hard-working ranching wife, who drove the local school bus for 30 years and also loved family. She retired to help manage her sons’ music careers as they broke away from the L.A., and was well-known and loved in the country music world.

Howard and David’s parents are called by their first names throughout the book. This was not their family tradition, but as time went on they moved to calling Frances and Homer by their Christian names. “Frances was working for us and people would call. It just seemed right to use her name,” Howard explains.

The book shares several humorous events in the brothers’ lives. It provides a nice balance of humor and wisdom from two performers who have weathered and grown through forty plus years in a business that is known as one of the most difficult to make a living at – and love family.

How did the Bellamy Brothers Book Come to Be?

“I started the book a few years ago,” David says, “gathering stories from our lives. With our touring and production schedules, it began to look like I would need help getting it done. It was hard to find a balance between Howard’s voice and my own, so we contacted one of our old friends and favorite writers, Bobby Braddock to help. He had four projects going at the time, so he referred us to Michael Kosser. Michael had written the handbook of Nashville, ‘How Nashville Became Music City’ and he fit in with the family, so we started interviews.”

“He did a great job,” Howard adds.

Throughout the book, strong family, rural ties to their land, hard work, and an unmitigated spirit to try just one more time shine through the pits and falls of lives well lived. Rich storytelling combines with historic events to make this text a treat for anyone who may have indulged in the sixties and seventies culture of “sex, drugs and rock-and-roll.”

Reading about the visits to Piedmont Park in Atlanta to hear the Allman Brothers play on Sundays during the early 1970s transported me to the Haight-Asbury era without leaving my chair. Then finding out that when Frances and Homer came to visit their boys, they were brought to the height of Atlanta’s counterculture scene is its own education.

Let Your Love Flow is full of fun, interesting stories. It is a great read and can be pre-ordered here (shipping April 13): http://honkytonkranchtv.richardsandsouthern.com/

Howard explains why The Bellamy Brothers are participating in this project, “We batted around the idea of having a reality show over the years, but those we spoke with wanted to manage who was on it and what it would be about. When the Cowboy Channel launched from RFD TV two years ago, they talked to us about the idea. We met up with them and they were willing to let us do it our way, and keep creative control.”

David continues, “The network wanted to do 26 episodes at first, but we countered with 13 to see how it goes. We are having a blast!” He begins sharing events in the series episodes and my appetite gets whet for April 8, when Honky Tonk Ranch premiers.

“We went to Weeki Wachee to ask the mermaids if we should do the show. Kind of a crystal ball sort of thing. We want to be sure to include plenty of our home turf in Honky Tonk Ranch.

One episode is of us on the tour bus and there is a donkey in bubble wrap. Someone comes out of the bus and exclaims, ‘What in the wide world of sports is going on here?!’”

Isn’t that a line from Blazing Saddles?

“We are huge Mel Brooks fans,” David and Howard respond in unison.

David’s sons, Jesse and Noah and their music are part of the storylines. Howard’s daughter, Susan Bellamy (David’s wife and matriarch of the cowboy clan), Melanie Owsten, Randy Heibert, and H.C. Young (ranch foreman) are all part of the show.

David shares about the benefits and challenges of adding filming to their already busy schedule, “It’s new and different. We are doing it ourselves (with the help of the Cowboy Channel production team, of course). We come up with the ideas for scenes, but there is no formal writing. Everything is impromptu. We’re not normal – and we’re a little more delirious now – which works for us.

Howard doesn’t like getting up early and having to wear pants.” David continues, and then laughs like he got one over on his older brother. Howard chimes in, “Filming interrupts my walking the dogs.”

You can watch the trailer for Honky Tonk Ranch here: https://www.youtube.com/watch?v=zBo6nAY2JAQ&feature=youtu.be

You can find out more at the Honky Tonk Ranch website by clicking here.

Chatting with Howard and David

These two NatureCoasters have overcome obstacle after obstacle without losing their love for life, music and the joy that sharing that music brings. Humor seems to be a necessary part of the equation.

Today they perform over 150 concerts yearly throughout the world.

“In a lot of ways, we are very, very fortunate because our concerts are more popular now than ever in our careers.  We love making music, so we will continue until we are shipped home in a pine box,” Howard says.

They travel throughout the U.S. mostly by tour bus out of Nashville, Tennessee. For Europe, they utilize a similar tour bus system, and the rest of the world has its own set of logistics.

For as long as they still feel good and are healthy, the Bellamys plan to continue their lifestyle. “We do a lot of maintenance for these old bodies, like vitamin B-12 shots and massages,” Howard and David share in our recent interview, “We gave up alcohol 15-18 years ago and don’t do those things that abuse ourselves anymore.”

“We love the adventure of visiting new places – seeing cattle on the streets in Mumbai, eating world cuisine. You know, our first song was an international hit, pushing us into the world. We are very curious people and love the adventure of traveling: different cultures and foods,” Howard says.

“Especially food. We ended up in Paris trying the local food, Greece, India. We like to eat,” David adds.

When it comes to music, the cowboys from Darby who made it big have quite a variety of favorites, from Procol Harem’s Whiter Shade of Pale, to the old country standards of Merle Haggard and old R & B, like Otis Redding.

When reading “Let Your Love Flow”, the many musical influences that David and Howard Bellamy were exposed to in their youth become apparent. Also, their father’s love of music as a form of entertainment, praise, family and community unifier is apparent. Pride in being who you are instead of what the world seems to fancy is pieced throughout.

“Our favorite song of our own changes day to day – Whistling Dixie and songs about our home with personal meanings… Old Hippies… but I suppose we have to say Let your Love Flow because of what it gave us,” David shares.

What does he think of having his sons follow The Bellamy Brothers in the music business?

“You know, they are in the music business at a time that the business is very bizarre. I really enjoy the music they make,” David says.

Howard adds, “They would have been better off being lawyers.”

Then they both chuckle and continue, “Not really. Their style doesn’t fit just one genre which can make things difficult. We hope to expose some of their music to a broader audience on the show.”

Do any of the next generation of Bellamys like ranch work?

“NO!” Howard and David exclaim together. “They don’t even know what it is. We have a cult of bohemians. That’s one of the problems with this lifestyle. None of them are really ranchers,” they continue. “But things will work out just fine, of that we have no doubt.”

Check out the trailer for The Bellamy Brothers new Honky Tonk Ranch reality television show, premiering April 8 at 8:30 p.m. EST below and make sure you get setup with the Cowboy Channel and set your dvr. 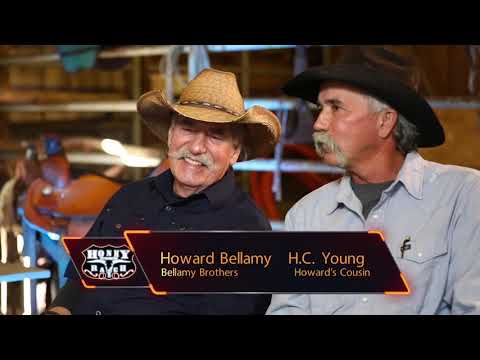 What can Fans Do to Help the Bellamy Brothers?

Let the network know how much you like the show by emailing the Cowboy Channel after you see an episode or two. Order a book by clicking here. And share this article with everyone you know so we can let our love flow throughout the world.

Where is the Cowboy Channel?

The Cowboy Channel is part of the RFD TV network, replacing the FamilyNet cable television network in July 2017. It is totally dedicated to the western lifestyle and headquartered from the Fort Worth Stockyards.

You can click here for more information on the Cowboy Channel.