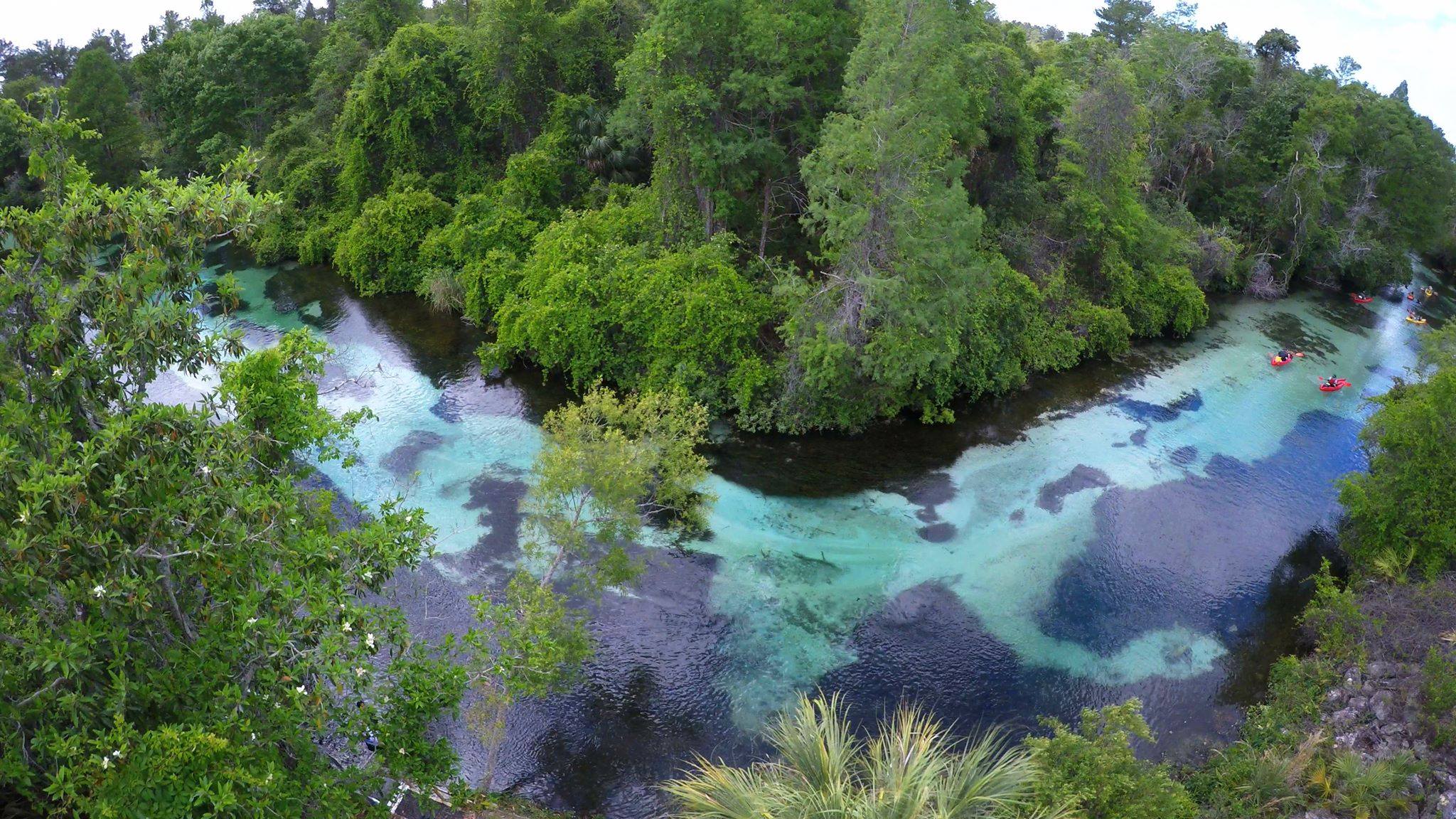 The City of Weeki Wachee was dissolved June 10, 2020, when Governor Ron DeSantis signed a bill created by State Rep. Blaise Ingoglia of Spring Hill to disband the City’s municipal status.

The name, Weeki Wachee, comes from the Seminole Indian words meaning “little spring” or “winding river.” However, the Weeki Wachee spring where the iconic mermaids swim is so deep that the bottom has never been found.

This is a first magnitude Florida spring, with more than 117 million gallons of crystal clear 74-degree water rushing out of underground caverns. It is also the beginning of twelve miles of magic called the Weeki Wachee River that visitors from around the world flock to for a unique kayak, SUP, or canoe paddle to the Gulf of Mexico.

In fact, the Weeki Wachee River paddle experience has become so popular that the Southwest Water Management District (SWFWMD) has created an educational program to help the river’s users protect this valuable natural resource. You can find out more here.

Weeki Wachee began as a tourist attraction October 13, 1947. The attraction was developed by Ocala resident and US Navy diver, Newton Perry.

Newton Perry, an amazing swimmer who taught visitors to swim at Silver Springs State Park in the 1930s. “Newt” was Ocala High School’s swim coach and star swimmer at age 16. After graduating from UF, where he was named to the All-American team, he returned to Silver Springs, performing for many television and movie producers.

Newton Perry developed a system that delivered air through a hose to performers, allowing them to take breaths while underwater and with several investors, built 18-seat theatre six feet into the side of the Weeki Wachee spring, allowing visitors to see the underwater synchronized ballets without getting wet. In 1950, Mr. Perry sold his interest in Weeki Wachee.

The attraction added an orchid garden, an abandoned Seminole village exhibit, a jungle cruise, a petting zoo and a gift shop. It became one of the most popular tourist attractions throughout the 1950s, with movies being filmed there and some big money came calling.

The American Broadcast Corporation (ABC) purchased the Weeki Wachee attraction in 1959 and began using its theatres and various entertainment businesses to promote the City of Live Mermaids. The entrance to the park was remodeled. The underwater theatre was expanded and improved, and the mermaid shows were expanded to themed stories with costumes and props, such as Peter Pan, Snow White, and Alice in Wonderland.

What began as underwater ballet, drinking sodas underwater, and diving to the depths of the spring to entertain American tourists in the 1940s and 50s was upgraded by the movie makers.

In the heyday, as many as eight shows were performed daily in the underwater theatre, with women from around the world coming to Weeki Wachee to audition for the coveted position of mermaid.

Movies were filmed in the Spring. Celebrities, including Elvis Presley, Don Knotts, Esther Williams, and Arthur Godfrey visited Weeki Wachee. In fact, more than half a million people came to watch a mermaid performance annually during this period.

The Weeki Wachee spring is approximately 100-feet wide with limestone sides. In the underwater theatre, the mermaid performers battle a 5-mph current, while acting out stories with apparent ease. It takes a lot of swimming skill and some real moxie. You can read about what it takes to be a Weeki Wachee mermaid here.

There is also a saying among those who have attained the privilege of being a Weeki Wachee mermaid. “Once a mermaid, always a mermaid.” Thusly in 1997, former mermaids were invited back to the park to perform for crowds.

A Historic Favorite comes Back from the Brink

ABC sold the park in the 1970s to Florida Leisure Attractions, Inc. Over the next 30 years, the park became run down to the point that the land’s lease owner took the park’s owners to court for back lease payments.

John Athanason, the Park’s Marketing Manager at the time, spoke to National Public Radio in an interview, “This management team did not want to see this part become extinct. So we took advantage of a loophole in the lease that allowed the owner of the attraction at that time to donate the lease to the city of Weeki Wachee. And we are an actual incorporated city. We are incorporated in 1966, we have a resident population of nine. We have a mayor who is a former mermaid herself, and she also serves as the general manager of the attraction.”

In 1982, a white sand beach, water slides, and a tubing river run opened within the park as Buccaneer Bay. This, too, had become run down, but with the help of the Friends and State funds, the well-loved waterpark was brought back to life.

With the clean, clear, cool water fueling its heartbeat, locals, and groups flock to enjoy a respite here from Florida’s hot summer days.

Some come for the mermaid show and the Park’s other activities and some just come to float and dive for the day. Families enjoy the sandy beach. Kids enjoy jumping off the raft and swimming back to do it again. Adults enjoy the tiki bar. There are picnic tables and guests may bring a picnic to this part of the park.

Buccaneer Bay is open seasonally, usually from Spring Break to Labor Day. Check with the Park for the most up-to-date information.

The Weekiwachee Preserve is an 11,206-acre preserve owned and managed by SWFWMD. It is part of the conservation lands that extend to Crystal River (with the Chassahowitzka Wildlife Management Area to the north).

This quiet preserve protects the coastal plain from flooding and provides wildlife habitat for black bears, numerous birds, and other protected species. It is bordered by the Weeki Wachee River to the north, Shoal Line Boulevard to the west, US 19 to the east, and Osowaw Boulevard to the south, with its entrance at 2345 Osowaw Blvd in Spring Hill.

There are 5.5 miles of hiking and bike trails, some paved and some not. There are several manmade lakes, leftovers from limerock mining of years gone past, but swimming is prohibited. Fishing is welcome and non-motorized boats are welcome on the lakes. You can view a video of the preserve here.

These amazing caves go right under US 19 next to the park, but access is not available to the public – and it is horribly dangerous. It is beautiful to watch, however, so check out a dive by Karst Underwater Research here.

Weeki Wachee is a Magical Place to Explore

Mermaids, first magnitude springs, a river so clear you can see the bottom for 12 miles, water slides, a conservation preserve, and a fun word all rolled into one. That’s Weeki Wachee. When it was a city, it had 15 human residents at its peak. As a place, it holds millions of hearts daily.

Today, you can visit the park to meet a mermaid, paddle the river, hike, bike, or fish the preserve, and marvel at the beauty of this magical place. Whatever activities you decide to do, please be certain to protect the environment as it is somewhat unique and fragile.

Be sure to plan a visit to Weeki Wachee. There are so many things to do, you may want to plan several days.

I nominated Weeki Wachee State Park as a place for visitors to see and it got mentioned in Readers Digest website a few years ago.

That is awesome, Eleanor! Thanks for promoting our beautiful, magical Nature Coast. 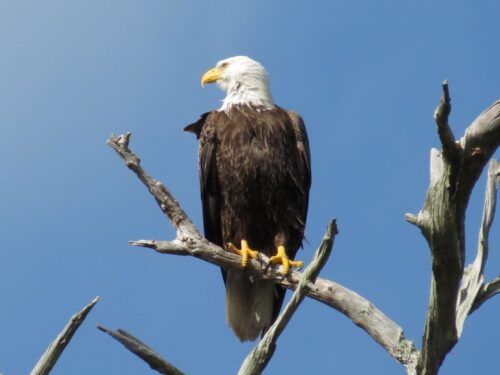